Perhaps the last major event of the year, the FCI European Dog Show opened on Tuesday, December 28, at Hungexpo. Helló Magyar thought that as dog lovers they had to check on the first day.

The event, originally scheduled for May, had to be postponed to the end of the year due to the pandemic. Thus, the FCI Dog Show has become the closing event of the “One with Nature” – World Hunt and Nature Show. The show was also visited by Helló Magyar.

The biggest event involving dogs in Hungary and Europe is held this year at Hungexpo in Budapest. From December 28 to 31, every day a colorful program will entertain dog lovers.

The exhibition is jointly organized by the World Canine Organization (Fédération Cynologique Internationale (FCI) in French) and the Hungarian National Association of Dog Breeders (Association MEOE).

Tickets are mid-priced. Adult tickets are available for 3,500 HUF, while seniors and students can visit the dog fair for 1,800 HUF.

The event can be divided into two parts. There is a large area (Pavilion A, D, E) where the actual dog show takes place with judges and “competitors”. At the same time, there are programs and performances, by and with dogs every day in Pavilion G. 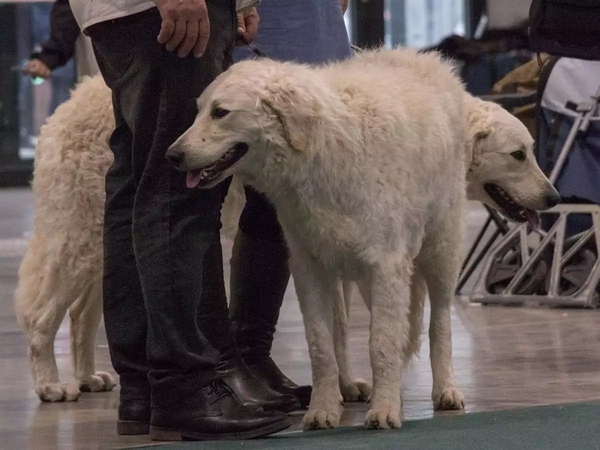 The professionals who take care of dogs in Hungary were looking forward to this event. Naturally, because the last time our country hosted the FCI was in 2008. According to the organizers, around 16,000 dogs from 57 countries will take part in the four-day event. You can already see it in the parking lot that visitors have come from all over the world. There are several caravans and minibuses, which means people have traveled thousands of miles just to compete with their pets at the FCI.

The culmination of the event will be on December 31. The breed group winners (selected from the breed winners) will compete for the title of the most beautiful dog in Europe. On the afternoon of the 31st, the winner of the most valuable trophy will be chosen from 16,000 dogs. If you are a fan of the domestic breed, you are especially recommended to attend the World Meeting of Hungarian Dog Breeds on December 30. 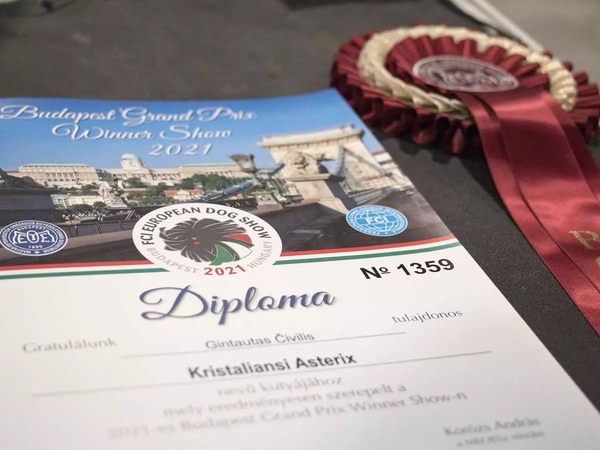 It is important to note that the show is a very serious competition for the participants. Winners of breed championships and other awards don’t just bask in the glory of awards. Winning also has a significant impact on breeding practices. The price of offspring can easily be inflated due to international recognition. 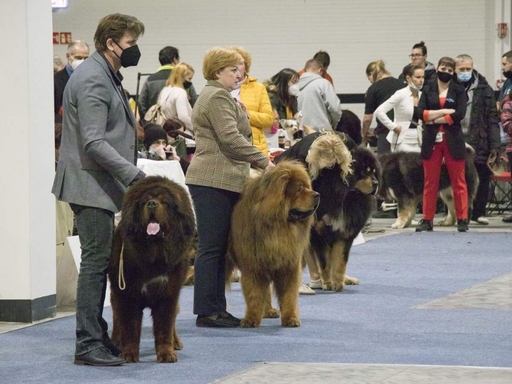 Participating dog owners invest an incredible amount of energy, time and money in their pets. It’s more of a professional league, with very few enthusiastic ‘amateurs’. It is also apparent from the material that certain families or groups of friends have been competing for a long time in this area. Depending on the breed, competitors have their own beauty table and grooming products, and many bring their own stirrups and mobile cages to the four-day European Championship.

One thing is certain: if you are a dog lover, you will not regret having attended the FCI show, where only the best in Europe compete. On top of that, you can meet special dogs up close that you’ve only seen in pictures. 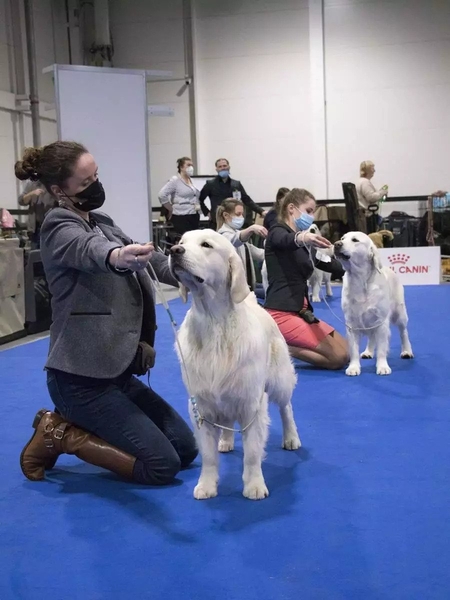 However, it’s also fun to watch the most popular dog breeds go head-to-head so you can see what a “real” German Shepherd, Dachshund or Golden Retriever looks like.

Presumably, the organizers are focusing on competitors, because merely interested people like us aren’t really informed. There were no maps or descriptions at the lodge entrances, so many people wandered around the vast area clueless. 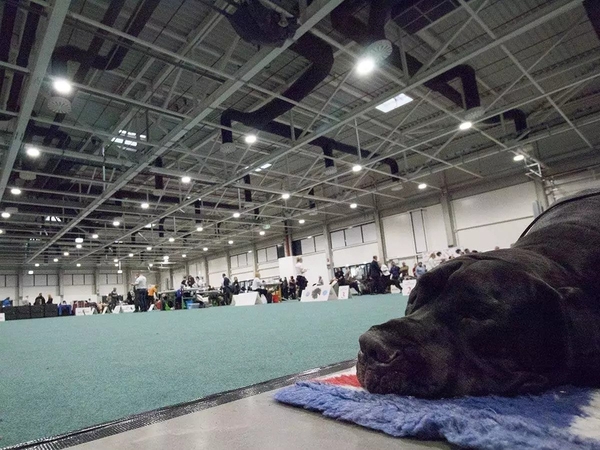 There are also no schedules on the stages so that visitors can find out about upcoming events. Unfortunately, we were unable to find support staff when we had questions. At such a large event, the minimum expectation is to have organizers at the entrances who can direct guests and provide information. That’s what we missed the most.

We would also have liked to get rid of our winter coats, but that was not possible, because to our surprise the cloakroom was not open. It goes without saying how uncomfortable it is to walk around for hours like this, especially when you have to wear your winter coats but also want to take photos of your favorite breeds. 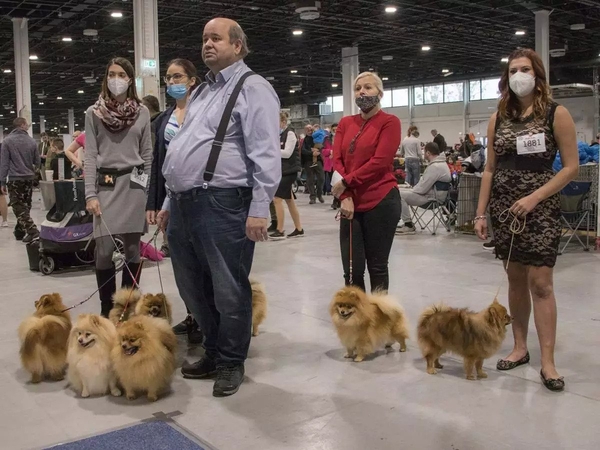 The huge stage and the temporary stand in Pavilion G have been very well designed and, for a better experience, you can even follow the demonstrations on large screens.

The organizers plan to hold obedience and rally obedience shows, service and search dog demonstrations, dog dance shows, remote steer shows and the Hungarian Breed Agility Championships . We attended the obedience show, which drew a few dozen people on Tuesday at noon. This venue will be full when the event moves here in the afternoon and the judges announce the day’s winners.

In the central streets between the pavilions, there were a few stalls where you could buy food specialties. In pavilion G, souvenirs for dogs were on sale (blankets, statues, mobile kennels, etc.). This exhibition will not become the favorite event for food lovers, because the selection was moderate and also quite expensive. For example, we tried pork cuts with fries, asked for mustard and bread on the side, and even though it was a big portion, we ended up paying 5500 HUF. 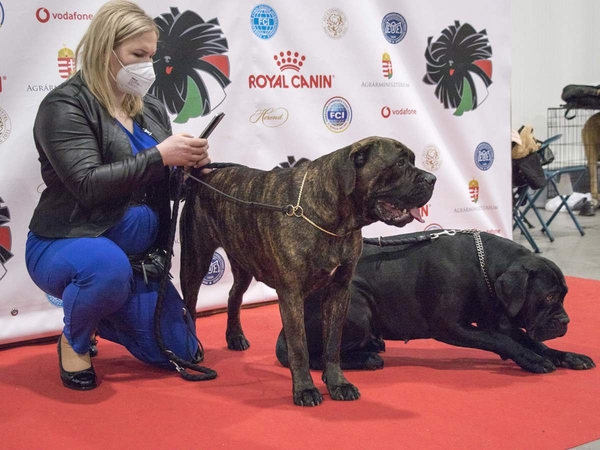 This event is really only recommended for dog lovers, as dogs often get close to visitors and people who are less fond of dogs may feel tense during this time.

But dog lovers will appreciate the proximity and even a few petting sessions, with the owners’ authorization of course.

All in all, we don’t regret visiting the FCI European Dog Show, and if you can, visit Hungexpo in the next few days. You can find the official website and schedule of programs here. 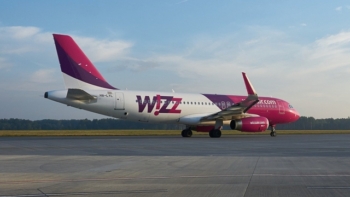 By Emily Fitzgerald / emily@chronline.com Lewis County residents who tune in to watch this year’s Westminster Kennel Club Dog Show will see a familiar face in Patty Keenan, a Chehalis resident who will judge the group of terriers at the 145th annual show, which will be broadcast live on FOX starting at 8 a.m. June […]

For nearly two decades, the National Dog Show has been the TV holiday fare, as has Macy’s Thanksgiving Day Parade. This year will be no different. The annual dog show puts different groups of dogs through their paces in front of judges and selects a Best in Show. It will air from noon to 2 […]